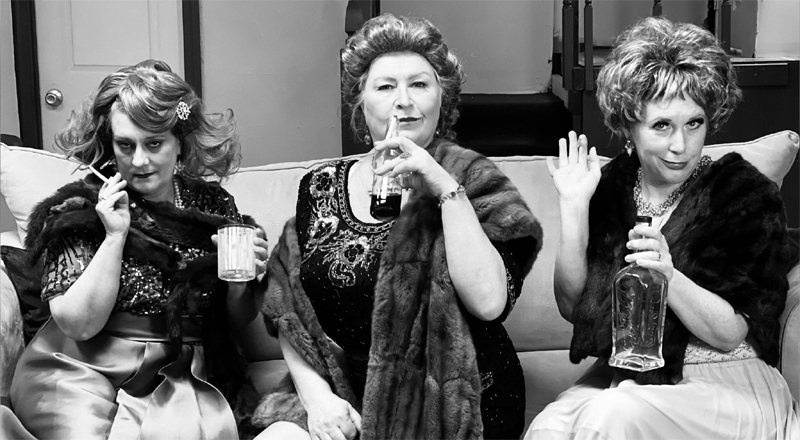 “OUTRAGEOUS! One of the bitchiest cat fights this side of Dynasty. Campy farce exploring the fine art of Hollywood backstabbing!”
— LA WEEKLY

“A recipe so packed with bitchy spices even the queens in West Hollywood will burn their tongues!”
— Fab Magazine

“Legends and Bridge” is a comedy imagining former, silver-screen legend Joan Crawford (matronly, washed-up, and pickled on spiked Pepsi) who invites Judy Garland (recently fired from her CBS TV show) and Bette Davis (bitter at no longer being the “Queen of Hollywood”) up to her Manhattan apartment in 1964 to live with her as they work on a “secret” film project. Joan attempts to get a sloppy Judy back into shape by putting her on an exercise regime, which Judy takes to like a cat in a washing machine. At the same time, she tries to butter Bette up with little presents. After much prodding from Bette and Judy, Joan reveals the project she has in mind is a screen adaptation of “St. Joan” with Judy and Bette playing bit characters while she stars as St. Joan: “Bette, you’ll play my mother, and Judy, you’ll play ‘the voices’.” After hearing this denture-shattering news, all hell breaks loose as each legend tries to maintain her position as top diva. Back-biting, catfights and skullduggery ensue. Throw in a young boy toy that Bette brings home and a drunk Tennessee Williams and watch the comedy unfold.

WATCH THE TRAILER BELOW