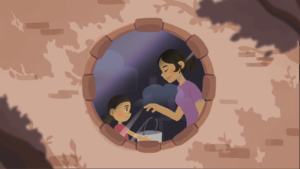 Much like the terrific ‘What’s There?’, Cycle is similarly transitional as it moves between the anthropomorphised living water of a mountain whose surprise at their sentience instigates a terrific depiction of the circular nature of eternity. Charting life to death to rebirth. The core idea however is, again like What’s There, about the effect the surrounding has and how essential the creation and end of each living water droplet is to the living human that surrounds the area.

The animation, unlike the adventurous styles applied in the previous two episodes, is far more stripped back and simplistic in a charming way that smooths any edge to feel most harmless. Perhaps you could interpret it as child-like but when combined with the motifs of the idea any sense of immaturity is washed away.

Symmetry brews in ‘Cycle’, as round peepholes allow us into the world. Akin to observing through a microscope, we see this microcosm of life magnified. Giving importance to the perceived unimportant in a poignantly focused and attentive tale. Cycle both heightens your awareness of your own space and the external factors which provide, whilst giving great weight to time and its aching infinity. It’s eye-opening and stings with an odd sense of guilt as it alerts you to all the things you take for granted. Bringing the core of the idea back to this central human conceit is what sparks life into this depiction of the cycle of life.

Nowhere near as mawkish as the premise would suggest, Cycle is airtight and does not let a second slip away maximising its runtime with an injection of profound simplicity provoking a quietly awe-inspiring awareness of your surroundings.

I am currently a college media student with a passion for film and criticism. As an aspiring writer, I have always had an urge to write, constantly trying to hone my abilities by practising and learning from those esteemed in the field.