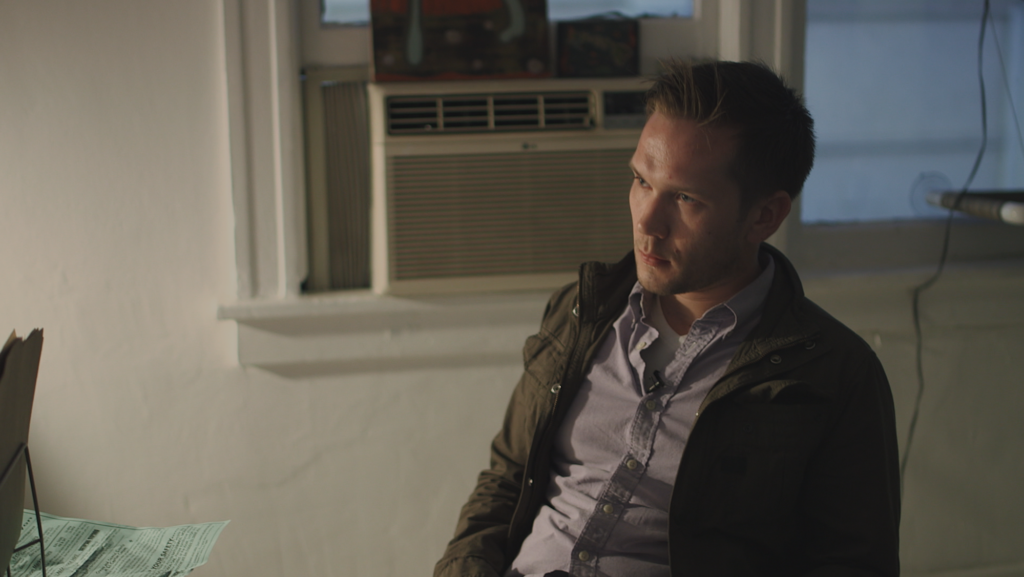 I have to admit I made a mistake before watching The Penny Black. I watched the trailer. And even though the trailer doesn’t reveal anything about the film, I felt I betrayed myself in my principle of going blind into a movie.

Fortunately, there’s a tricky and conventional aspect to the introduction of The Penny Black. This a film with tons of confidence in its presentation of a twisty story that can’t be anything but interesting. In its first ten minutes you will identify the kind of story you’re being told. You will identify who’s who in this mysterious thriller of realism and deceit. Yes, I forgot all about the trailer when expectations were shifted towards a more emotional journey.

The Penny Black is a rather coincidental story about a conversation, one that sparks something bigger and more invasive than everyone thought it could be. What starts as an innocent admission of fact becomes an exploration of the bizarre boundaries of the concept of persona.

After a conversation, two filmmakers decide to shoot a story about a man with an interesting claim. The day after they meet him, they start shooting. An interview reveals that a neighbor of his left him a duffel bag filled with something very valuable. He says he only needs to hold on to them for a while. The neighbor disappears and Will decides to take a look. He notices there are only scrapbooks containing stamps.

However, these are no simple stamps. It appears they’re very valuable. When the filmmakers start noticing this convenient coincidence, they begin to know Will. His past is obscure as well as his behavior. This is no regular man. There is something. The documentary digs deep into Will and the mystery of the stamps, the neighbor, and a strange misplacement too good to be true.

The documentary absorbs us quickly into a web of mistrust and lies. Even Will, the man who started it all seems to conveniently disappear whenever he wants. But it’s the whole concept of noir that makes the realistic film even more interesting. The fact that this is happening is extraordinary. Once the investigation goes towards a darker setting, reality sets in and the dangerous backdrop makes an appearance.

It’s in the final scene when we’re able to rest and actually believe in some of Will’s own arguments. He may be telling the truth, but now the extreme limbs his story has grown are more important than his own dark backstory. He comes from a family that has too many twists and turns to put aside. Exploring that seems to awake a defensive side to Will, and this is when the filmmakers draw the line.

This isn’t your everyday story of sleuths trying to come up with an explanation for an impressive turn of events. It’s a coincidental film about a young man showing his true nature during a strange investigation that concerns him and some of his behavior

Joe Saunders, behind a director’s chair but actively participating in the movie, makes awkward questions and finds some answers. We, the audience, know something is going on beyond the smiles and sympathetic attitude. We are not sure if Will is lying all the time. But one thing we’re sure of is we know he’s not telling the whole truth.