The Making of Untitled Earth Sim 64 is a fascinating look behind the scenes of an independent short film. This is a must watch for all independent filmmakers out there making films on a low budget.

Film students take note! Nothing beats the experience of making a film.

Filmmaker Jonathan Wilhelmsson also shares some information with us on the filmmaking process.

We shot the film in Gothenburg, Sweden over a weekend in the summer of 2020. It was a micro-budget project, but we were lucky enough to have my old workplace lend us the equipment for free. We shot it with a skeleton crew consisting of three people behind the camera, two actors on location and a voice-actor from Australia who pre recorded his lines so that we could use playback on set. It was a really fun and relaxed shoot, the most intense moment being the filming of the final scene. I had the genius idea to shoot it during blue hour, which looks beautiful, but it also meant that we had about 30 minutes to capture a lot of important shots. We hustled and managed to make it just in time before we lost the light.

One of the key reasons we were able to make the film on such a low budget was that the entire post-production, from the edit and visual effects to the final grade and sound design, was finished by myself on my laptop. Filmmaking is all about teamwork of course and I had a great group of friends and creatives who helped me with ideas and feedback through the whole process. Not all films can have a post-production crew of one, but I think it’s a great example of how accessible filmmaking has become. If you can’t afford a big crew or a post-production house to work on your film, that doesn’t need to stop you.

It certainly took a lot of hours to finish it all, but the great thing about independent low-budget filmmaking is that while you might not be rich with money, you’re generally richer with time. It was quite a sad day for us when we had to postpone that shoot in Hong Kong. We still don’t know when we’ll be able to go through with it, but I’m certainly happy that it all led us to create this little film. We had a blast making it and I hope you have fun watching it. Thanks for your time! 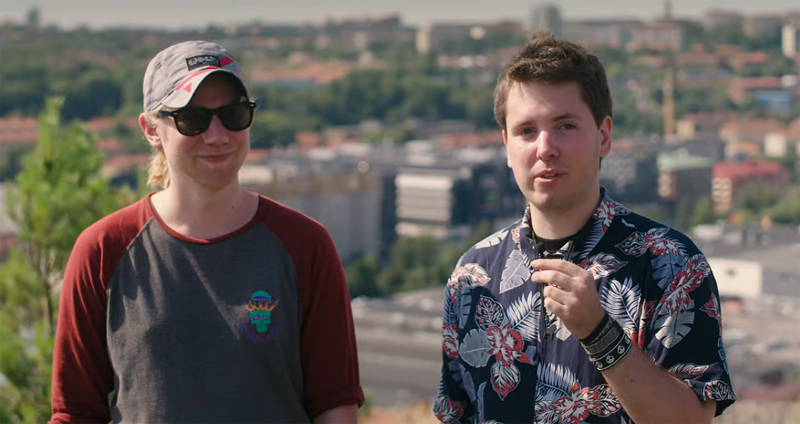 What software did you use?

Adobe Premiere Pro for the edit, sound design and grade, After Effects and Photoshop for the VFX and graphic design, and Audition for some sound editing.

What camera did you use?

The Sony FX9 mainly, but also a Panasonic GH4 for some pick-up shots and for a shot where we had to hang the camera out of a 10th floor window.

How long did it take to make the film?

About half a year, working mostly on weekends and evenings.

Where did you learn how to do VFX?

Video Copilot and other free online tutorials, and by playing around and experimenting on my own.

How did you find the actors?

The two supporting actors, James and Alexandra, were old friends. For the lead we put up ads in different Facebook groups, looking for native English-speaking actors living in Sweden, and we found Karen.